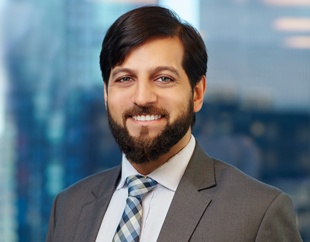 Anil Vassanji represents corporations and individuals in the financial services, real estate, and other industries in connection with a wide variety of complex commercial disputes.

Prior to joining Friedman Kaplan, Mr. Vassanji was an associate at Sullivan & Cromwell LLP. During his time there, he represented a wide range of corporate and individual clients on an array of civil and criminal disputes, including securities, environmental, class action, intellectual property, antitrust, appeals, cybersecurity, and regulatory matters.

Mr. Vassanji is a member of Law360's Access to Justice Editorial Advisory Board and serves on the Executive Committee of the Board of Directors of the New York Civil Liberties Union as Treasurer. He is also a member of the Project Development Committee of the Law Firm Antiracism Alliance, a coalition of over 250 law firms collaborating to amplify the voices of communities and individuals oppressed by racism, to better use the law as a vehicle for change that benefits communities of color, and to promote racial equity in the law. He is part of the Legal Services Corporation's Emerging Leaders Council, a group composed of up-and-coming leaders working to raise awareness of the civil legal aid crisis in the United States and was selected as a member of the Leadership Council on Legal Diversity’s 2021 class of Pathfinders, a program offering leadership and career development training for high-performing, up-and-coming attorneys.

The London School of Economics and Political Science, LL.M. (2012)

United States Court of Appeals for the District of Columbia Circuit