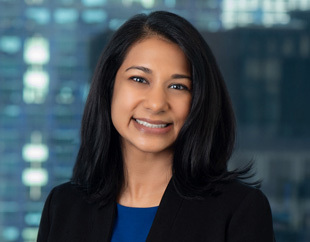 Priyanka Wityk is a seasoned litigator representing public and private companies across a variety of industries, including financial, healthcare, pharmaceutical, and real estate. She has expertise in litigating complex commercial disputes in federal and state court that involve antitrust, contract, securities, bankruptcy, trade secret misappropriation, business torts, and other issues.

Prior to joining Friedman Kaplan, Ms. Wityk was an associate at Paul, Weiss, Rifkind, Wharton & Garrison LLP, where she represented financial institutions and corporations in complex commercial litigation matters, including securities class actions, shareholder derivative lawsuits, and antitrust litigation. She also represented companies and individuals in white collar matters, such as representing a bank in a Department of Justice investigation concerning anti-money laundering policies and procedures, as well as internal investigations, including participation in an internal investigation for a company following allegations of sexual harassment.

Ms. Wityk is a member of the Leadership Council on Legal Diversity’s 2021 class of Fellows, a program designed to identify, train, and advance the next generation of leaders in the legal profession. She is also a member of the National Association of Women Lawyers and its Leadership Program Committee.

Order of the Coif, The George Washington University Law School