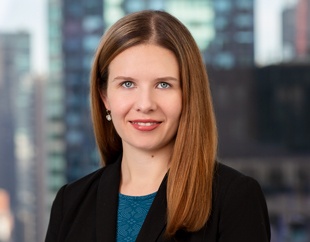 Prior to joining Friedman Kaplan, Ms. Bierut was an associate at Ropes & Gray LLP, where she represented financial institutions and corporations in complex commercial litigation, including securities class actions, contract disputes, and bankruptcy matters. She has extensive experience with all stages of litigation, including motion practice, discovery, trial, and appeals. She frequently practices in New York state and federal courts. She has also represented companies and individuals in white collar matters, including investigations by the Department of Justice and Securities and Exchange Commission, as well as internal investigations, including an internal inquiry for a company following allegations of sexual harassment.

Ms. Bierut is an adjunct professor at Fordham University School of Law, where she teaches legal writing. She is also a member of the First Decade Committee of the Federal Bar Council, an organization dedicated to promoting excellence in federal practice and fellowship among federal practitioners in the Second Circuit.

The Honorable Shira A. Scheindlin, U.S. District Court for the Southern District of New York

Order of the Coif, Fordham University School of Law